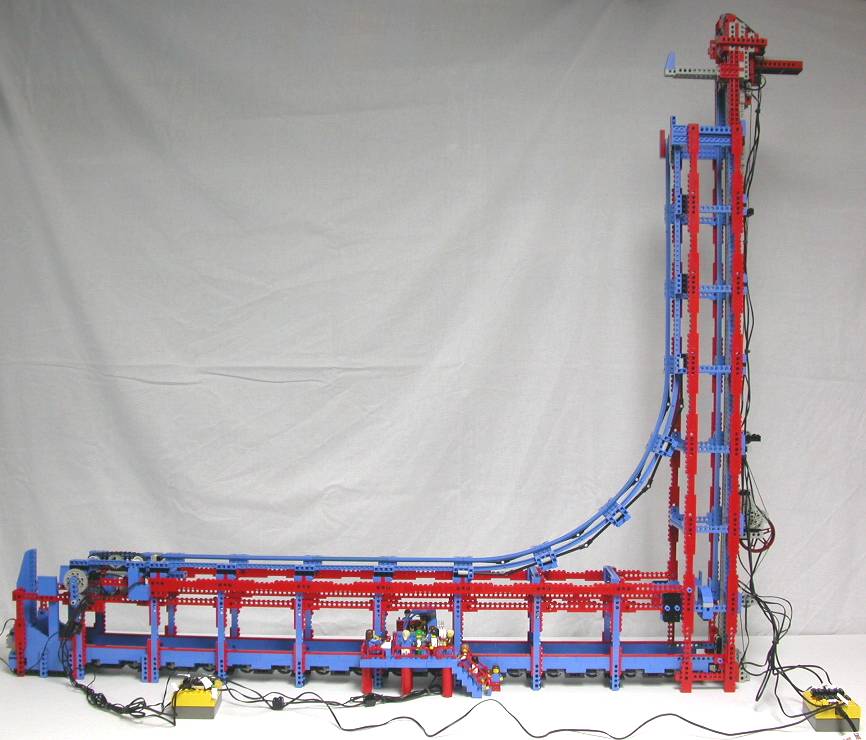 The Gravity Well is a First generation Freefall ride manufactured by the Intamin Corporation. They can be found in amusement parks all over the world, including Cedar Point’s Demon Drop and Mr. Hyde’s Nasty Fall at Six Flags Ohio. They typically range from 100 to 125 feet tall, and provide a freefall sensation of 2-3 seconds.

This particular version isn’t based off the color or design of any particular Freefall ride, it looks like it does due to my availability of bricks. When I conceived of this project, I knew I wanted it to be 100% automated with Mindstorms, and be approximately close to true minifig scale.

The model is 44 inches tall and 50 inches long. This works out to a minifig scale of 145 feet tall and 166 feet long. This is a little taller than a standard version of this ride, but that’s mostly due to the motor mount sitting at the top of the tower. The actually drop of the car is 29 inches, which is just under 100 feet scale.

There are two original Mindstorms bricks that control the entire mechanism. The car starts from the load/unload platform at the center of the ride. From here, Mindstorms RCX 1 moves the car to the lift, pulls the car to the top of the hill, pushes it off the top, and resets the elevator and pusher. RCX 2 operates the flipper that returns car to vertical, pushes it back to the load/unload platform, and stops the car. In all there are 4 motors, 3 touch sensors, 2 rotation sensors, 1 light sensor, and 1 light bulb. I’ll go through each mechanism individually and describe the system.

Lift Hill
The ride starts with the pushers, a series of tires that shove the car from the load/unload platform to the start of the lift. The lift is operated via a continuous elevator cable string. The string wraps once around the large dark red pulley and pulls the cable through a series of pulleys at the top and bottom of the lift. A rubber band wrapped around the hub of the pulley provides enough friction to keep the string from slipping. There is a touch sensor at the top of the lift thst stops the car when it reaches the peak. A second touch sensor at the bottom of the tower stops the lift there as well.

The Drop
Once the touch sensor triggers the stop at the top of the lift, a rack and pinion geartrain attached to the top set of lift rails pushes the car towards the drop. A rotation sensor measures the distance that the car is pushed and stops it just short of the drop to provide that sense of anticipation. The rack then pushes the car so that it drops down the rails and resets to the start position, at which time the elevator lift returns to the base. That’s the end of RCX 1’s job in the cycle.

The Flipper
Once the car drops, it reaches the end of the ride and is stopped by a tank tread that serves as a brake. The car triggers a touch sensor that makes the flipper mechanism activate. A rotation sensor stops the flipper once it’s vertical and then returns it to horizontal. Once the flipper is back to horizontal, the pusher wheels activate again and move the car to the load/unload platform. A light sensor and a light bulb are mounted at the load/unload platform. When the car breaks the light beam, the pusher motors shut off and one cycle of the ride comes to a close. 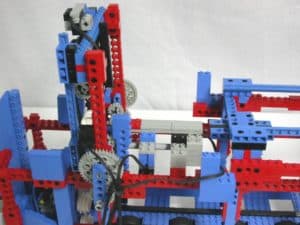 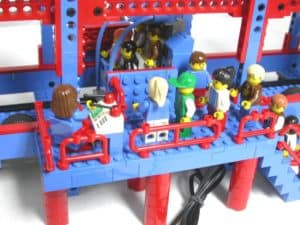 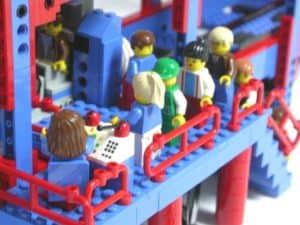 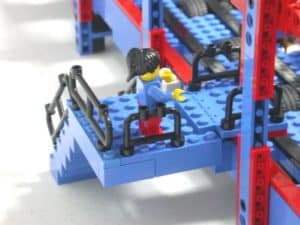 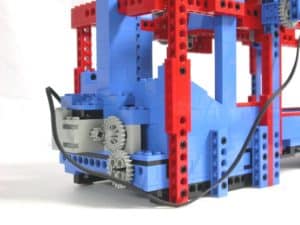 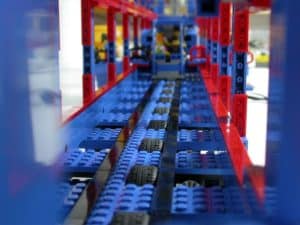 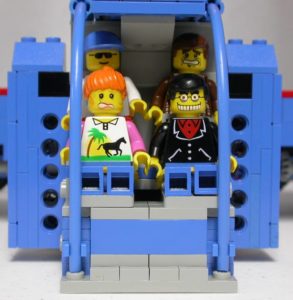 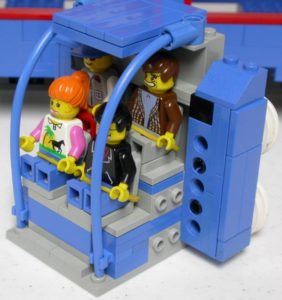 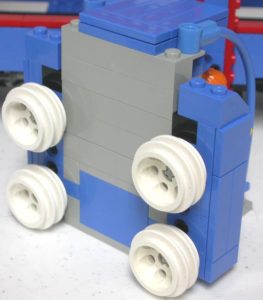 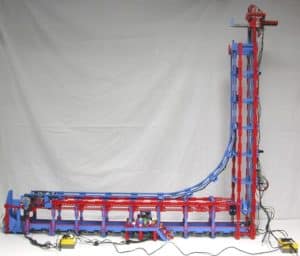 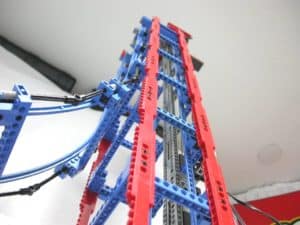 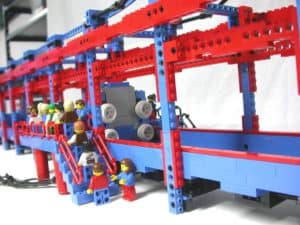 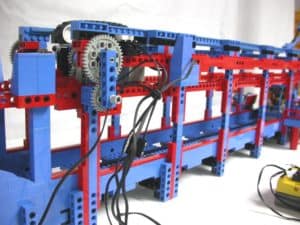 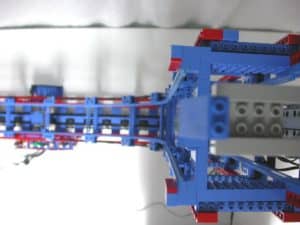 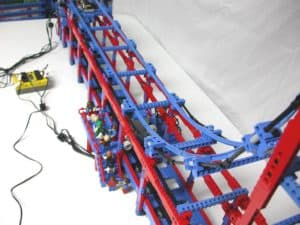 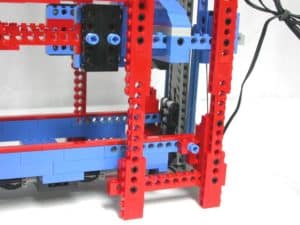 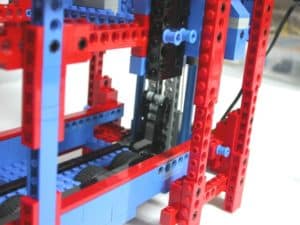 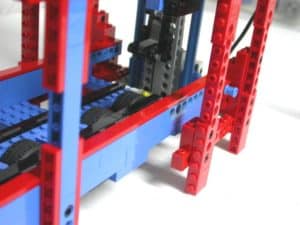 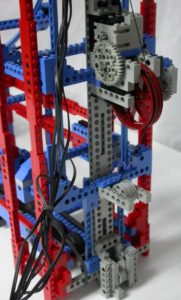 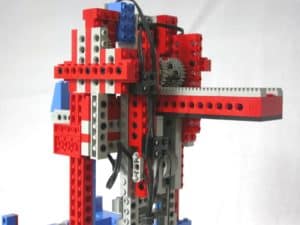 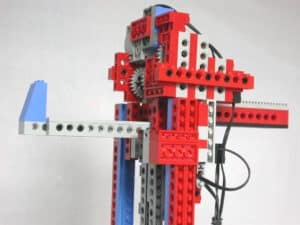 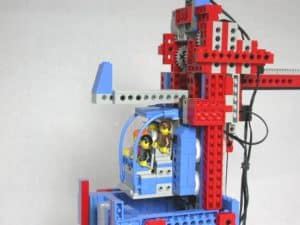 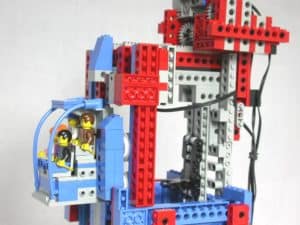 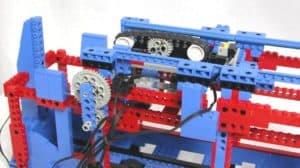 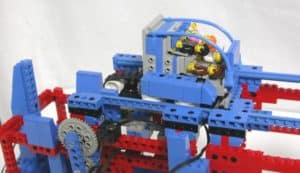 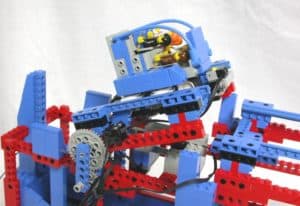